Qi (pronounced /tʃiː/ CHEE;[1] from the Chinese word qi, “energy flow”) is an open interface standard that defines wireless power transfer using inductive charging over distances of up to 4 cm (1.6 inches), and is developed by the Wireless Power Consortium.[2] The system uses a charging pad and a compatible device, which is placed on top of the pad, charging via resonant inductive coupling.[3]

First released in 2008, the Qi standard had by 2016 been incorporated into more than 140 smartphones, tablets and other devices.[5]

Under the Qi specification, “low power” inductive transfers deliver power below 5 W using inductive coupling between two planar coils. These coils are typically 5 mm apart but can be up to 40 mm and possibly farther apart.[2] 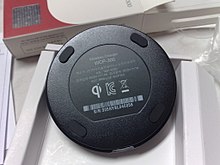 The bottom side of an LG WCP-300 Qi charging pad

Nokia first adopted Qi in its Lumia 920 phone in 2012,[9] and the Google/LG Nexus 4 followed later that year. Toyota began offering a Qi charging cradle as a factory option on its 2013 Avalon Limited,[10] with Ssangyong the second car manufacturer to offer a Qi option, also in 2013.[11]

In 2015, a survey found that 76% of people surveyed in the United States, United Kingdom, and China were aware of wireless charging (an increase from 36% the previous year), and 20% were using it — however only 16% of those using it were using it daily.[12] Furniture retailer IKEA introduced lamps and tables with integrated wireless chargers for sale in 2015,[13] and the Lexus NX gained an optional Qi charging pad in the center console.[14] An estimated 120 million wirelessly charging phones were sold that year,[12] notably the Samsung Galaxy S6, which supported both Qi and the competing Power Matters Alliance standards.[15] However, the existence of several competing wireless charging standards was still seen as a barrier to adoption.[15]

By early 2017, Qi had displaced the competing standards, with no new products featuring Rezence.[16] On September 12, 2017, Apple Inc. announced that their new smartphones, the iPhone 8, iPhone 8 Plus, and the iPhone X, will support the Qi standard. Apple also announced plans to expand the standard with a new protocol called AirPower.

Devices that operate with the Qi standard rely on electromagnetic induction between planar coils. A Qi system consists of two types of devices – the Base Station, which is connected to a power source and provides inductive power, and Mobile Devices, which consume inductive power. The Base Station contains a power transmitter that comprises a transmitting coil that generates an oscillating magnetic field; the Mobile Device contains a power receiver holding a receiving coil. The magnetic field induces an alternating current in the receiving coil by Faraday’s law of induction. Close spacing of the two coils, as well as shielding on their surfaces, ensure the inductive power transfer is efficient.

Figure 1-1 illustrates the basic system configuration. As shown, a power transmitter includes two main functional units—a power conversion unit and a communications and control unit. The diagram shows the transmitting coil (array) generating the magnetic field as part of the power conversion unit. The control and communications unit regulates the transferred power to the level that the power receiver requests. The diagram also demonstrates that a Base Station may contain numerous transmitters, allowing for multiple Mobile Devices to be placed on the same Base Station and inductively charge until each of its batteries are fully charged. Finally, the system unit in the diagram comprises all other functionality of the Base Station, such as input power provisioning, control of multiple power transmitters, and user interfacing.

As an example from the 2017 version 1.2.2 of the Qi specification (referenced above), the A2 reference Qi low-power transmitter has a coil of 20 turns (in two layers) in a flat coil, wound on a form with a 19mm inner diameter and a 40mm outer diameter, with a below-coil shield of soft iron at least 4mm larger in diameter which gives an inductance of 24 +-1 microhenries. This coil is placed in a series resonant circuit with a 200 nF capacitor to yield a resonant circuit with a natural resonance at ~140 KHz when coupled to the receiver coil.

This series resonant circuit is then driven by an H-bridge switching arrangement from the DC source; at full power, the voltage in the capacitor can reach 50 volts. Power control is automatic; the Qi specification requires that the actual voltage applied be controllable in steps at least as small as 50 millivolts.

Rather than down-regulate the charging voltage in the device, Qi chargers meeting the A2 reference use a PID (proportional-integral-derivative) controller to modulate the delivered power according to the primary cell voltage.

Other Qi charge transmitters start their connections at 140 KHz, but can change frequencies to find a frequency with a better match, as the mutual inductance between transmitter and receiver coils will vary according to the standoff distance between transmitter and receiver coils, and thus the natural resonance frequency will vary. Different Qi reference designs have different coil arrangements, including oval coil and multi-coil systems as well as more complex resonance networks with multiple inductors and capacitors. These designs allow frequency-agile operation at frequencies from 105 to 205 KHz and with maximum resonant circuit voltages as high as 200 volts.

The Qi power receiver hardware reference design 1, also from version 1.2.2 of the Qi specification, starts with a rectangular coil of wire 44mm x 30mm outside size, with 14 turns of wire, and with an above-coil magnetic shield. This coil is wired into a parallel resonant circuit with a pair of capacitors (of 127 nanofarads and 1.6 nanofarads in series). The power output is taken across the 1.6 nanofarad capacitor.

Power output to the portable device is via a full-wave bridge wired across the 1.6 nanofarad capacitor; the power is typically filtered with a 20 microfarad capacitor before delivery to the charge controller.

Other Qi power receivers use alternate resonance modulators, including switching a resistor or pair of resistors across the receiver resonator capacitor, both before and after the bridge rectifier.